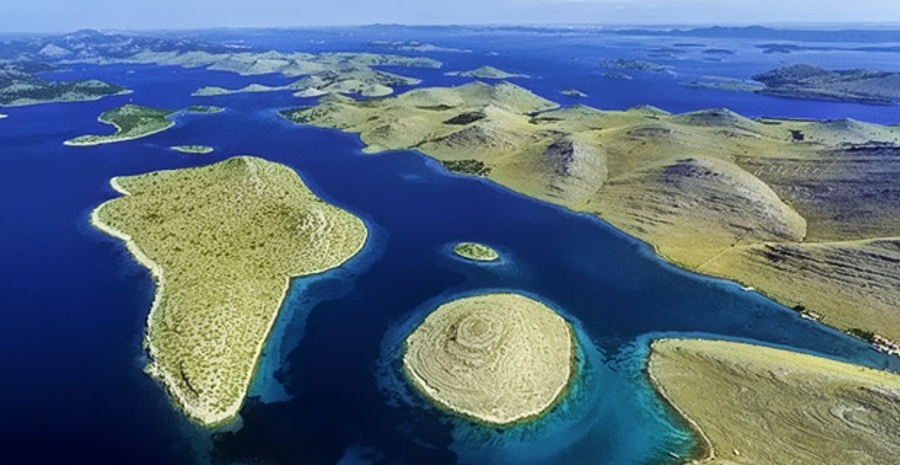 The Kornati Islands are the densest archipelago in the Mediterranean. Nowhere in Mediterranean has so many islands squeezed so little. Because of the unclear criteria about the definition of the island in general, there is no general agreement on their number. But we do not think we will make a mistake if this number is rounded to 150. The surface of the aquarium is about 320 km2.

The Kornati National Park is situated between the Šibenik and Zadar riviera. Interesting island appearance and exceptional natural resources are due to the fact that most of the archipelago has been protected as a national park since 1980.

Inspired by the beauty of the Kornati, famous writer George Bernard Shaw wrote: ” On the last day of the Creation God desired to crown His work and thus created Kornati Islands out of tears, stars and breath.”

When you visit the Kornati National Park by boat, the first high-cliffs will catch your eyes. The most impressive of them are from 60 to even 80 meters in height, also an indispensable part of sailing to the sea straits between the islands where they can be anchored and enjoy swimming in crystal clear sea.

You can visit the Kornati by your own boat or by arranging excursion boats or renting a boat. (ubaci poveznicu na gliser)

The largest island in the archipelago is Kornat. Murterins, the most numerous among the owners of the estate, call him Kurnat, the islands of Kurnati, and themselves Kurnatari, but the most common name is Kornat and Kornati. The surface of the island is 32 525 315 m2, the length of the coast is 66.1 km, and the height of 235 m – the peak Metlin. The island is a 25.2 km (or 13.6 sea mile) long or. But the distinctive character and personality of the Kornati archipelago is due to small islands.

Of all the products that made the Kornat hand the most important and most noticeable is certainly the wall, more precisely the drywall. One of the basic features of the drywall is the orientation itself. Because all the big islands are elongated, all the walls are built from sea to sea, that is, from one side to the other. The wall is so high that the sheep cannot skip or cross the other pasture and is as wide as it is needed to withstand the impact of the wind.

Only one artefact on the Kornati Karst will attract the same attention as a drywall. These are isolated fences – olive groves covered with wide drywall. We find them in more than a hundred places in the archipelago, on the “most unexpected” locations. On the steep sides of Škuja and Smokica, on the slopes of Smokvena and Gustac, on the mild docks Njivice, Piškere, Žakna, Lavse, Suhe Punte, Stativale, Pinezela and Grbe, on flat plains from Knjizak to Šipnata.

What to see in the National Park Kornati?

Some of the geological events in the past of these terrains are strikingly painted in the famous Kornati “crowns”. The vertical cliffs of the Kornati islands facing the open sea are the most popular phenomenon of this park. The “crowns” represent the surface of a large tectonic fault extending from Istria and ending somewhere in central Dalmatia (perhaps south), causing the global movement of Africa to the north and its “stinging” in Europe.

On the “crowns”, some of the “brave” organisms were found in their home: the gray hawk, the sea worm, the cocoon, etc.

Climbing on the crowns is not allowed!

Magazine’s slate on the Kornati island

Magazine’s slate is a special kind of landslide, where the “limestone” package slipped on its lithological the same basis. The cause of this occurrence most likely lies in the earthquake. It is difficult to say when this earthquake occurred, how strong it was and where it was an epicenter. There are numerous speculations in this regard, but concrete evidence of the time and conditions of the shrinkage is still missing.

To get to the Magazine slate, you’ll have to “squat” into a private property. Therefore, please be especially careful and considerate to owners of the property in such a way that they do not endanger you in any way (skipping and / or demolishing heavily constructed drywall, picking fruits, harassing the sheep etc.)

We recommend Kravljačica, Strižanj or Vruje on the island of Kornat as the starting point for going to the Magazine slate.

To distinguish a viewpoint (kornatski vrh) and say that he is better than others, it is not possible. Each will bring you a special joy and excitement.

Metrina on the island of Kornati is the highest and most impressive peak in the NP “Kornati” (237 m), but it is hardest to reach it. Opata peak (on the southern part of the island of Kornati), as well as Lika peak on island Velika Smokica, offers a beautiful view of the Murter’s sea towards the northeast and to the part of National park “Kornati” on the other. Otočevac on the island of Piškera offers a view almost to the whole area of ​​NP “Kornati”. The top of Levrnake is easy to come and enjoyable for it.

We remind you that the land part of the park is privately owned and we ask that you, by climbing the Kornati peaks, behave as particularly careful and considerate guests.

Diving tours in NP “Kornati” are only allowed for organized and approved diving groups. Therefore, if you intend to dive to National Park “Kornati” (which is certainly recommended), contact one of the diving centers that have the approval for doing this activity at NP “Kornati”.

In the area of ​​NP “Kornati” there are seven zones for diving visits. Which of these zones is especially recommended, it is hard to say. Each of them brings with them special excitement and experience. Leave the dive center to choose a location for you – you will not be disappointed.

The first confirmed colonization of the Kornati Islands was recorded during Illyrian times. Small square dwellings, either in groups or in groups (such as under Pedinke, above Željkovci, Pod village near Trtuse and Grbe on Žut island), the forts (Scikat, Stražisce, Tureta, Grba) and the piles (tumulus, almost all elevations on the island of Kornat and Žut), testify to the significant population density of the islands in prehistoric times. Stockbreeding was the main economic activity, but fisheries played a significant role in the economy of the then residents.

The Byzantine era has left many of the most remarkable buildings in Kornati today: the fort of Tureta on the island of Kornat (construction of late antiquity and early Middle Ages – probably from the 6th century). The fort was assumed to have had a military purpose with the purpose of securing and controlling sailing then rather insecure on the Adriatic Sea.

On the hill above Tarac was built, in all likelihood, in VI. Century the Tureta fort, whose military crew secured safe navigation to the Kornati Canal. Tureta is the only fortress from that time on the Adriatic that has not been destroyed, apparently because it was located in a place without a settlement, so the population did not he did not take advantage of the stone for building other things. The fort is today in a neglected state. At the foot of the hill, in the area between the small cove and the field, the church of St. Mary which is probably  built at the same time as fort. To date there is no answer yet to the question of whether a church or fortification has been built before or may have been built at the same time.

Early Christian Basilica and The church of Our Lady of Tarac

A very interesting building from the Byzantine era is the old Christian basilica at the foot of the Tureta fortress, which still has a large part of the apse and part of the former foundations. Considering the size of the church (30 x 20 m), it is assumed that at that time a considerable number of inhabitants lived in Kornati. In the immediate vicinity of the church (today’s sheep’s fork), there are traces of the foundations of a former building that doubts whether it was a Templar monastery or a Benedictine monastery.

From the Middle Ages there are very interesting cultural buildings in the park area, among which is certainly the most impressive church of Our Lady of Tarac. A modest, one-roomed sacral building (a type of rural late-Romanesque church) was built on the site of an Old Christian basilica and most probably built from the remains of the older church. The time for the construction of Our Lady of Tarac is not quite clear, so there are assumptions that it is between 12. and 16th centurie. In this church are still holding masses (every first Sunday in July) whose meaning has overgrown exclusively religious frames and have become part of the tourist attractions of this area.

On the island of Vela Panitula, at the beginning of the 16th century, there was a Venetian fortress which was used primarily as a place for collecting fishing tax from Kornati fishermen. In 1532 the Venetian government ordered the Kornati fishermen to take all their catches to the island of Vela Panitula for tax collection. In the immediate vicinity of the Venetian castle on the island of Piškera (Jadra), the fishermen set up a village with 36 huts and magazines, eight mulberry trees and a mobile bridge between Vela Panitla and Piškera, which was quite large at that time. As part of the settlement was built a single-faced church with Gothic construction elements, dedicated in 1560. Fishermen stayed in the resort only during the summer’s “darkness” (the best time to catch blue fish – when there is no moon in the sky). In all likelihood, with the fall of the Venetian Republic at the end of the 18th century, the citadel and the entire village of Piškera suddenly disappeared. It is interesting that today almost no traces of the fishermen’s village are visible, while the castle has grown only to the remnants of the remains. The church is on the other hand restored and is still in operation.